Japanese on discovery tour in Germany

Due to the phasing out of nuclear energy, the transformation of the energy system is one of Germany’s most vital challenges of the 21st century. The total withdrawal from atomic energy in Germany is intended to be completed by 2022. The plan provides for electricity and heat generation through alternative fuels such as natural gas and sophisticated technological processes. With this objective, Germany is setting an innovative example of worldwide interest.

It should thus come as no surprise that following the disaster in March 2011 in Fukushima, a Japanese delegation, led by former Prime Minister Jun’ichiro Koizumi, visited the biogas plant of the company Biocraft Nohra GmbH & Co KG in the Weimar region operated with a gas engine of MWM. Biogas is indisputably considered one of the key renewable energy sources. An important aspect here is the significance of biogas utilization for the energy turnaround in Germany – and the consequences resulting for local communities. 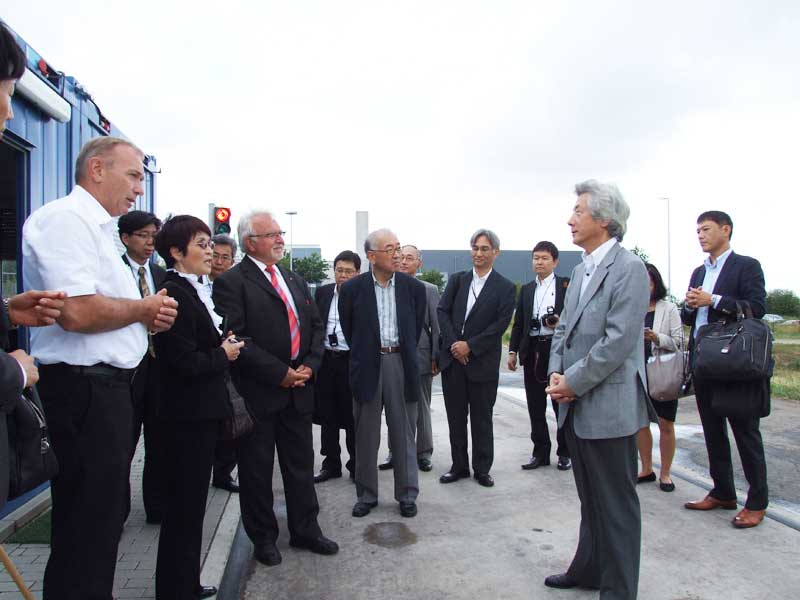 The Japanese delegation with former head of government Koizumi (right) is interested in the benefits of a biogas system.

The former prime minister was accompanied by energy experts from the Japanese nuclear industry and power plant operators. Already in the run-up to the trip, the delegation gained information about the Renewable Energy Sources Act (EEG). The thrust of this interest included high-performance systems for decentralized power production.

The future of nuclear energy – Germany and Japan

Jun’ichiro Koizumi admitted during his trip that he too had believed in the future of nuclear energy and that in Japan, atomic energy had been actively promoted prior to the disaster in Fukushima. “In the meantime I’ve come to think differently about it,” he told the delegation. The eyes of many experts in Japan are currently focused on Germany. Koizumi is convinced that if this country was successful in achieving an energy turnaround and switching over to renewable energies, then other countries would follow.

MWM gas engines (power generators) for decentralized energy production in cogeneration systems are run on different gas types, such as natural gas and gas similar to natural gas, biogas, or hydrogenous gases. They are designed for optimum electrical and thermal efficiency, low operating and service costs, as well as high reliability and availability.

Cogeneration systems with natural gas, biogas and other gases

In addition to biogas and hydrogenous gas, natural gas is considered one of the most important fuels. Rising natural gas prices and sustainable environmental protection require optimum efficiency when converting fuels into electricity, heat and cold. Eco-friendliness and a sustainable management of natural resources are the guiding principles of MWM’s corporate responsibility when producing gas engines and systems solutions. Thus, the eco-friendliness of the power generators is being continuously improved, reducing the demand for natural resources.

Unlike solar and wind power plants, gas-operated cogeneration plants offer base load capability. This means that the power is continuously available 24/7. Thanks to flexible plant ramp up/down, it is possible to respond to fluctuations due to lack of sunlight or slack wind conditions as well as to massive solar radiation.

MWM is represented in Japan and other countries in Asia-Pacific region from Singapore location.