The delivery of the four MWM gas engines represents an important step with a view to the plans of Energieversorgung Nordhausen to repower the meanwhile 23-year-old cogeneration power plant on Kyffhäuserstrasse in Nordhausen, Germany. The town in north Thuringia on the southern fringe of the Harz Mountains has set ambitious goals for converting its energy supply.

According to the schedule, the engines – each of which weighs about 18 t – are to go live on October 27, 2017 and generate power and heat energy for the Nordhausen district heat network, thereby making a key contribution to the energy reform of the town and the region as a whole. Until the new engines are ready to go live, a number of structural modifications are necessary at the Nordhausen CHP plant, which will be performed speedily. 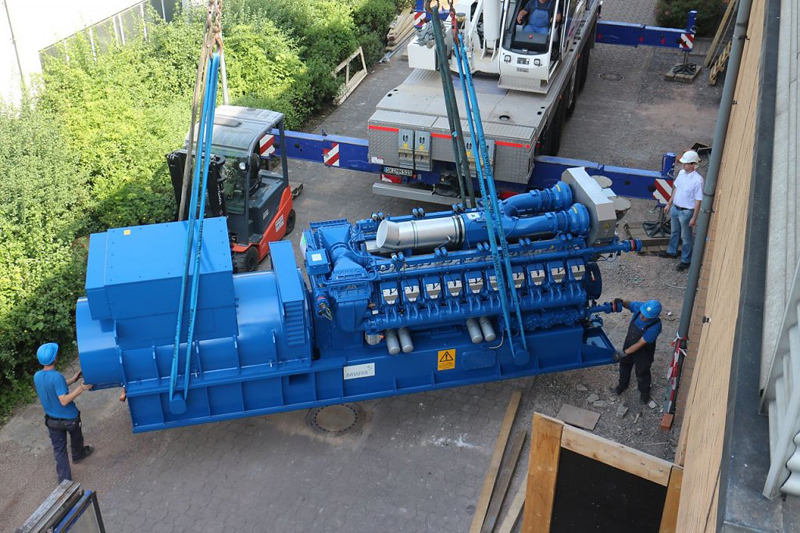 The four MWM gas engines from Mannheim, each weighing 18 t, as they approach their destination in Nordhausen, Thuringia.

So far, the CHP plant, which had replaced Nordhausen’s old combined heat and power station in 1994, has delivered a total output of 15,000 kW, including 8,500 kW of thermal energy and 6,500 kW of electric energy. Thanks to ongoing building modernization measures, the town’s heat demand has dropped steadily over the past years, while the power consumption has increased. By installing the new MWM gas engines, the Nordhausen energy supplier is responding to the changed energy needs.

The generation of thermal energy has been throttled to 8,000 kWth, while the electrical output of the cogeneration power plant has been stepped up 1,500 kWel to 8,000 kWel. With its four new MWM TCG 2020 gas engines, the CHP plant will be able to accommodate the current energy needs of Nordhausen and achieve a significant efficiency gain through the repowering measure.

Recently, Thuringia’s local politics have seen more intensive discussions on the energy reform and the heat market. The conclusion has been reached that the energy reform is much more difficult to implement in the heat sector than in the power sector. Obviously, supposedly secure strategies such as building insulation have often failed to provide the intended saving effect, and the modernization of heating systems as well as the integration of renewable energies is progressing very slowly. Thus, it is becoming increasingly evident that the development and improved coverage of district heat networks could be a viable solution. Under consideration of these aspects, Nordhausen is on the right track with its three distributed cogeneration plants that supply heat energy to the district heat network.