The Spanish food enterprise La Unión Corp. sells fruits and vegetables and is considered to be the world’s leading supplier of cucumbers. The company has 26 operating centers and about 1,500 employees. Every year, La Unión Corp. supplies the markets with more than 400,000 t of fruit and vegetable products, about 70 percent of which are distributed to the European markets. This year, the company’s trigeneration (power, heat, cold) plant was upgraded with a stronger MWM TCG 2020 V16 gas engine in order optimize the cooling processes for higher capacities and to cut energy costs. 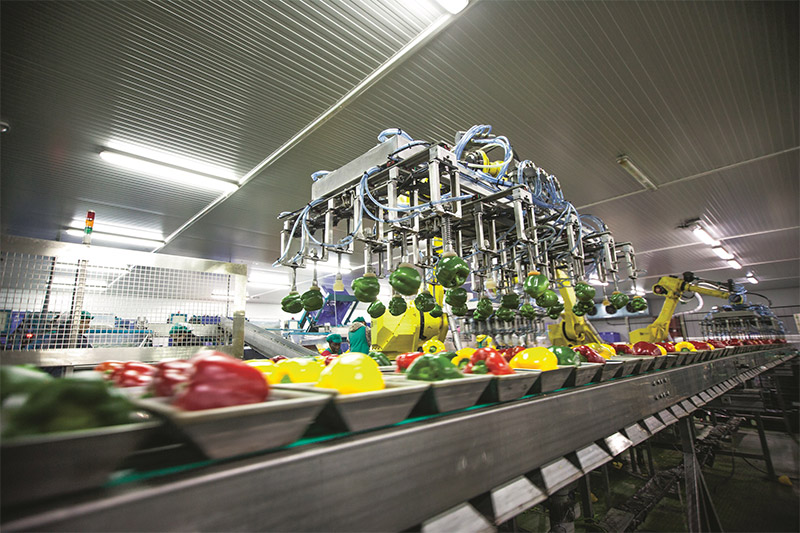 A bell pepper sorting system at La Unión Corp. Energy generation is not the only area in which the Spanish vegetable producer is highly efficient. The entire production system has been equipped according to the state of the art in order to ensure maximum quality and food safety. (Photograph: Alhóndiga La Unión, S.A.)

Back in 2012, La Unión Corp. implemented an MWM trigeneration solution with an absorption chiller in order to cool the stored products effectively. The MWM TCG 2020 V16 gas engine installed for this purpose produced about 1,500 kW of power, and the ammonia absorption chiller generated 820 kW of cold at -3°C. The generated cold was transferred to the connected cooling chambers for cooling purposes. The absorption chiller, whose heat demand was covered by the heat generated by the engine exhaust gas, cooled a glycol/water mixture to -3°C. In this way, the combined engine absorption chiller produced 820 kW of cold throughout most of the year. Of the electrical energy generated by the MWM gas engine, about 12 GWh of power were exported to the public grid every year, an amount sufficient to cover the power consumption of about 12,000 people.

In view of the significant energy savings already achieved with the MWM trigeneration system installed back in 2012, La Unión decided to modernize the plant with another MWM gas engine. After some 70,000 operating hours, the old engine was replaced with a powerful MWM TCG 2020 V16 gas engine. The new MWM TCG 2020 V16 has an electrical efficiency of 43.2 percent and supplies 1,543 kW of heat energy to the ammonia absorption chiller. The total efficiency of the gas engine is about 87.6 percent. The new engine has optimized the temperature of the charge air cooling circuit, thereby improving the performance of the gas engine during the summer months and increasing the plant’s yearly electrical energy production.

CHP Plant Ready to Use in Only Two Weeks

To minimize the downtime of the plant, the MWM TCG 2020 V16 gas engine was delivered and commissioned within only two weeks. The trigeneration plant with its new engine went live on October 9, 2020, reliably supplying La Unión Corp. with power and cold for product cooling purposes. 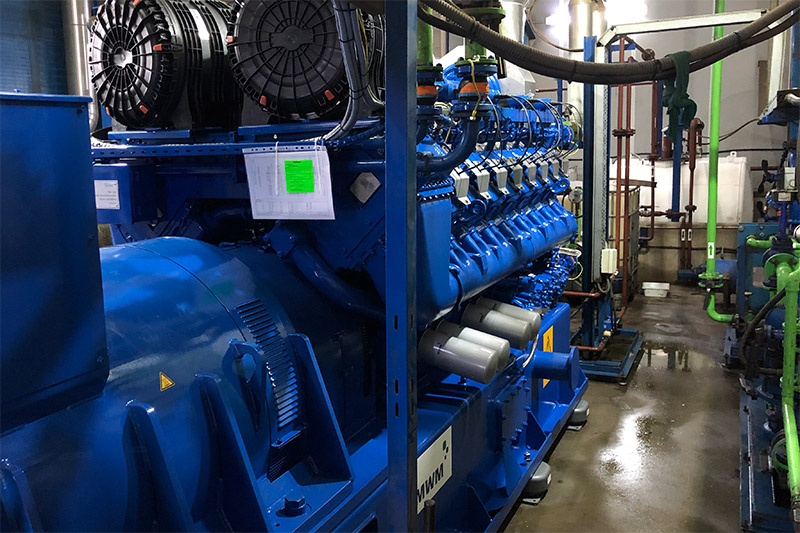 The MWM TCG 2020 gas engine was delivered and installed within only 14 days in order to minimize the downtime of the trigeneration plant. (Photograph: Alhóndiga La Unión, S.A.)

Compared to the separate generation of electrical energy and heat, cogeneration and trigeneration plants make much better use of the primary energy. MWM cogeneration power plants (CHP plants) enable economically and ecologically efficient energy generation. The plant transforms the employed energy into electrical energy and heat right on site. The resulting exhaust heat can be reused directly and is not lost. Viable fuels include natural gas, biogas, mine gas, or other gases. The power generated by the cogeneration power plant can be consumed on site or be fed into the public grid for a feed-in tariff.