In terms of freight and passenger figures, Franz Josef Strauss Airport in Munich is Germany’s second-largest airport. Last year, some 47.9 million passengers and 350 thousand t of freight were transported from the Munich airport. Since the airport opened in 1992, it has been supervised by the MWM Service Center South. 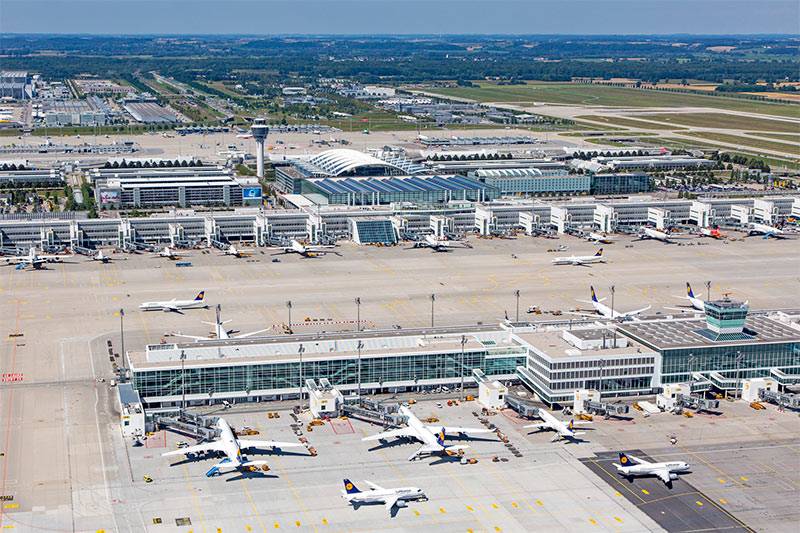 Progressive Modernization of the Energy Supply

Initially, seven MWM TBDG 441 V16B diesel gas engines with an output of 1,580 kWel and about 1,800 kWth each secured the airport’s energy and emergency power supply. Compared to conventional energy generation, the carbon emissions could thus be reduced by about 30,000 t/year. In 2002, the airport’s energy center was expanded with two cogeneration power plants. For this purpose, two MWM TCG 2032 V16 gas engines were installed. In 2015, the energy supply was further modernized. A new cogeneration plant with four additional TCG 2032 V16 gensets replaced the previous diesel gas engines, which are now only used for the emergency power supply. In 2018, the airport got another TCG 2032 V16 engine in order to minimize downtimes during the large E60 and E70 maintenance rounds. In early 2020, the previously used gas engine was subjected to an intermediate overhaul according to maintenance level E60, and the engine was returned to the airport for a possible replacement. In this way, Munich airport is able to perform a quick replacement and secure the power supply even if something unexpected should occur.

Using trigeneration, electricity, heat, and cold are produced and used to supply the buildings and hangars of the Munich airport. (Copyright: Flughafen München)

Since 1992, i.e. for almost 30 years, the MWM Service Center South, based in Eching near Munich, has supported the airport company in optimizing its service workflows. For example, by 2014, the flow times for general overhauls had been reduced by about 60 percent. MWM’s services include regular maintenance of the cogeneration power plants and gas engines: “The maintenance intervals depend on the gas type used, the operating mode, and the operating conditions”, explains Klaus Volpe, Head of the MWM Service Center in Eching. “Due to the higher workload from frequent start and stops, certain components —such as the main bearings and the ignition—are subject to more stress and thus to earlier wear and tear. Plants that run continually on natural gas usually have maintenance intervals of 2,000 to 4,000 operating hours.”

Optimum Use of Trigeneration

Using trigeneration, 7.44 MW of electricity, 8.7 MW of heat, and 5.3 MW of cold are produced and used to supply the buildings and hangars of the Munich airport. Part of the plant is used as emergency power system, e.g. in order to restore the energy supply of the landing lights within seconds. In addition to heat and power, the combination of a cogeneration power plant with an absorption refrigerator for trigeneration can also provide cooling. In the absorption refrigerator, the exhaust heat from the power generation in the cogeneration power plant runs a thermal compressor, which in turn drives a cooling cycle. Depending on the substrate mix used, the thermal efficiency is 60 to 80 percent. Trigeneration makes sure that the primary energy is utilized efficiently even in the warmer summer months. Especially food production plants, hospitals, office centers, hotels and airports can use trigeneration for their cooling and air-conditioning processes.