The two MWM TCG 3016 V16 gas engines were installed during the period from June to November 2019. They replace the plant’s MWM TCG 2016 V16 gensets, which had been used since 2007, after more than 70,000 operating hours. Each of the newly developed gas engines has a thermal output of 750 kW and an electrical output of 700 kW. The cogeneration power plant on Schanzenbarg supplies one of the city’s two district heat networks and is operated in an array with a farmer’s biogas cogeneration power plant, which is about 3 miles away. The plant was erected by the general contractor Kraftanlagen Hamburg.

High Security of Supply Thanks to MWM Gas Engines

The primary energy sources for the operation of the cogeneration power plant are natural gas and biomethane. As the operation of the MWM gas engines is heat-controlled, only one of the two engines is used in summer. The biogas plant that is located a few miles away serves as the base load for the heat district network. Holger Herzberg, the responsible planner and project manager of the municipal service provider, projects about 7,000 and 6,000 operating hours, respectively, per MWM engine per year. “The project and the engine replacement focused on minimized emissions and high thermal efficiency”, explains Herzberg. The plants boast a thermal efficiency of 46 percent and an electrical efficiency of 42 percent. In combination with the SCR catalysts of the manufacturer DCL, the MWM cogeneration power plants save about 10 percent of the carbon emissions compared to the previous plant. 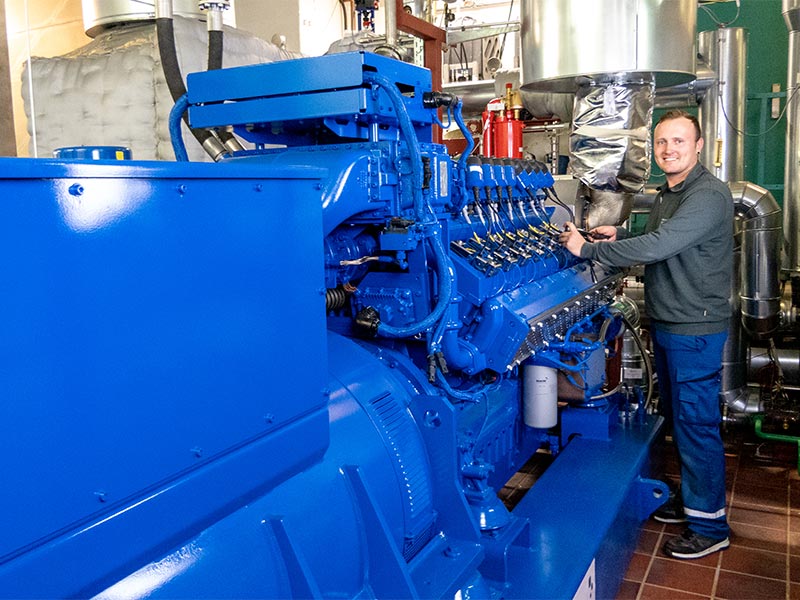 An MWM TCG 3016 V16 gas engine had already been installed at Vereinigte Stadtwerke as field test plant back in 2016. The 800 kWel gas engine enables energy savings of about 25,000 kWh and is equipped with a number of additional energy saving options. Thanks to the customizations, the anyhow outstanding efficiency of the MWM gas engines can be increased even more.

The MWM gas engines of the TCG 3016 series are more than a mere iteration of MWM’s tried and tested gensets. The new gas engines have been developed from scratch for perfect alignment with the challenges of Industry 4.0 and the changed framework conditions of a dynamic market environment in the age of global value chains. The gas engines deliver outstanding efficiency, reliability, flexibility, and eco-compatibility in the output range from 400 kWel to 1,000 kWel. The innovative drive of the new engines is evident from the greatly reduced fuel costs, extremely low lubricant consumption, and the digitized power plant control TPEM