“Energie & Management” designated the two MWM cogeneration plants of the University of Bayreuth, which have been converted for permanent operation, as “Cogeneration Power Plant of the Month” of February. On the university campus in Bayreuth, the modernized cogeneration plants are no longer responsible solely for the emergency power supply of the Ecological Botanical Garden, but are now also connected to the heat grid. The new combined heat and power (CHP) plant in the Heat and Cooling Center South went live at the end of 2019.

Apart from the two Deutz-MWM G604BV12E gas engines with a total output of 960 kWel, which were overhauled after almost 30 years of operation, a new power-to-heat plant and a natural gas peak load boiler were installed. This ensures the heat supply of the Ecological Botanical Garden of the University of Bayreuth in the event of a failure of one of the cogeneration power plants. In addition to the conversion of the gas engines, the hydraulic integration in the heat network was modified. The engines provide combined heat and power (CHP) generation. Thanks to the modernization, the exhaust heat can be collected with the help of heat exchangers and be directly fed into the local heat grid of the University of Bayreuth. Prior to the conversion, both the cogeneration power plants and the power-to-heat plant were used exclusively in standalone mode for the emergency supply of the garden. Thus, the plant had to be kept on stand-by throughout the year although it only used to be operated in test mode for a few hours. Through the modernization, the operating time of the MWM cogeneration plants now goes up to about 4,300 hours/year, resulting in a significant increase in the energy efficiency of the CHP plant. 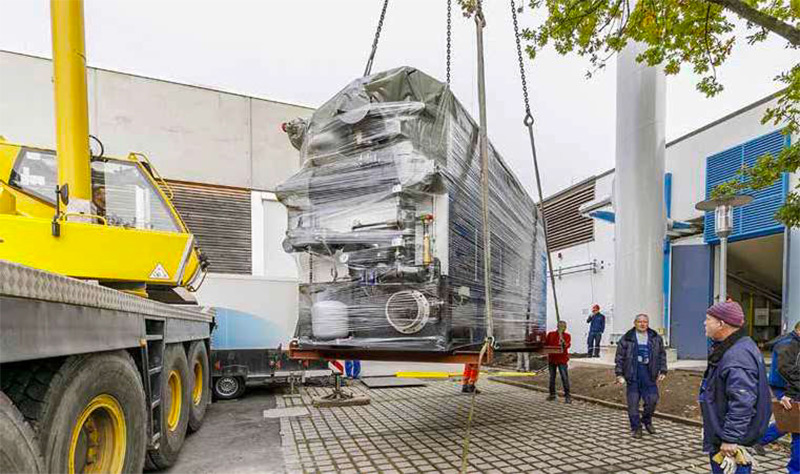 Feed-in to the Heat Network and Carbon Savings of 1,150 t/Year

The conversion of the electrical and hydraulic connection to the two MWM cogeneration power plants now enables the emergency power supply of the Ecological Botanical Garden and the permanent feed-in of heat to the university’s grid. “The CHP feed-in tariff and the internal power privilege for overhauled existing plants ensure economic operation of the emergency supply”, says Thomas Gollwitzer of the Institute for Energy Technology at the University of Applied Sciences Amberg-Weiden. As the existing plant has been overhauled without increasing the output of the cogeneration power plants, the generated power can be used internally in the Heat and Cooling Center with reduced EEG levy. The power fed into the public grid is subject to a feed-in tariff pursuant to the German Combined Heat and Power Act (KWKG). The workload of the natural gas boiler in the Heat and Cooling Center North has been reduced, and heat can be fed into the university’s heat grid. Through the conversion of the campus grid to this more efficient and cost-optimized operating mode, the University of Bayreuth also saves up to 1,150 t of carbon a year. In addition to improved security of supply, the cogeneration power plants thus make a sustainable contribution to the “Green Campus Initiative” of the University of Bayreuth, which promotes climate protection through greenhouse gas neutrality by 2030 and effective protection of resources.