2018 in Retrospect: Digitization and Flexibilization of Powerful MWM Gas Engines for Maximum Efficiency in the Age of Industry 4.0

At various levels, 2018 was a successful, productive year for MWM: By launching its new gas engine series TCG 3016 together with the fully digitized power plant control system TPEM (Total Plant & Energy Management), the company duly responded to the changed framework conditions of the dynamic market environment in this age of global value chains. Additionally, numerous CHP plant modernization and upgrade projects were rolled out in 2018 in collaboration with MWM service and distribution partners.

In the context of the energy reform and increasing decentralization, the subjects of network stability and flexibilization are growing in importance for power producers and consumers. In response to the demand for more flexibility in distributed energy generation, MWM delivered a fast ramp-up option for CHP plants. A software option enables the fast ramp-up of the MWM TCG 2032 gas engine. With the new fast ramp-up option for gas-fired power plants in flex operation, the process takes less than five minutes from the ramp-up request to 100 percent load on the network.

The new MWM TCG 3016 gas engine that was introduced to the market in 2018 was developed from scratch. A special feature of this series is the fully digitized power plant control TPEM (Total Plant & Energy Management), which enables optimum on-site or remote control and monitoring of the entire CHP plant for maximum efficiency. Apart from the greatly reduced installation and operation costs, the new series boasts improved availability, reliability, robustness, and eco-compatibility.

At the 19th WorldMediaFestival 2018 in Hamburg, Germany, the product film that was published shortly after the launch of the MWM engine series qualified for the intermedia-globe silver award.

To maximize the financial flexibility and benefits for its customers, the MWM Service Center in Berlin launched an engine replacement campaign for cogeneration power plants with 0 percent financing for the replacement of the MWM TCG 2016 gas engine. To ensure seamless operation and to minimize the downtime of the CHP plants, the gas engines are ready for operation in only 3-4 days despite the amount of work involved in a general overhaul.

In 2018, MWM again rolled out numerous distributed energy supply projects in cooperation with MWM service partners. Each project is unique in terms of its type and implementation, as the installation team is confronted with diverse requirements on site.

With its biogas plant, a dairy farmer in Schleswig-Holstein supplies 50 inhabitants of Wentorf with distributed heat energy. The CHP plant was fully modernized by installing an MWM TCG 3016 V12 gas genset with TPEM control. With an overall efficiency of 83.5 percent, the new cogeneration power plant ensures reliable and efficient energy generation. 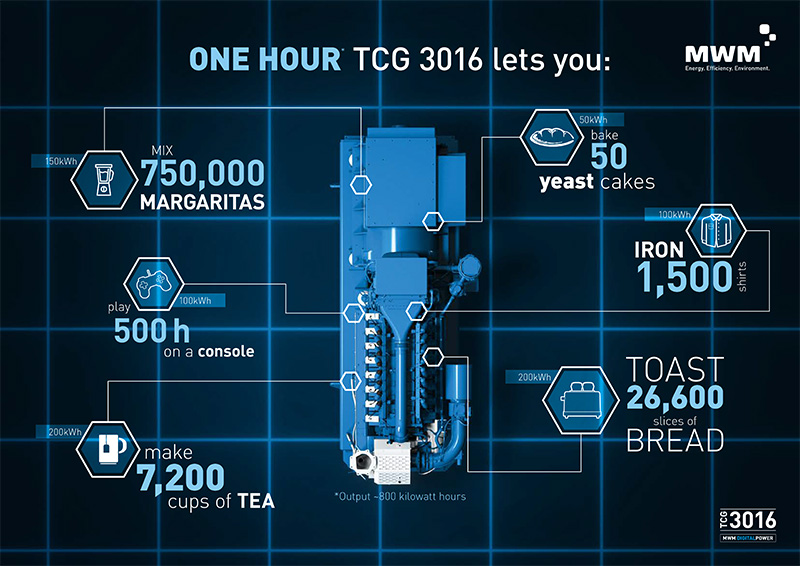 In 2018, after some 80,000 hours of operation, the CHP plant of the Würzburg energy supplier was modernized and upgraded for the entry to the control energy market. The two newly installed MWM TCG 2020 V12 gensets increase the electrical efficiency significantly, enabling an overall efficiency of more than 93 percent. For the Würzburg municipal utility provider, the investment will render the operation more efficient on a long-term basis.

The MWM team is satisfied with its achievements in the last 12 months and looks toward 2019 with confidence. MWM would like to thank its partners and customers for the successful collaboration in 2018 and wishes all a Merry Christmas and a Happy New Year.