To expand his heat network, Norbert Hack decided to invest in state-of-the-art CHP plant and gas engine technology. In line with the advice he got from his engine dealer, he opted for the latest MWM TCG 3016 V12 gas engine with an electrical output of 600 kW and a thermal output of 604 kW. The Hacks are impressed by the new cogeneration plant’s overall efficiency of 83.5 percent, which ensures reliable and efficient energy on a daily basis. The farmers praise features such as the low biogas consumption and high output, the smooth operation, and the workmanship of the gas engine from Mannheim. A special aspect that distinguishes the new biogas-fired engine from other power gensets is the integrated plant control TPEM (Total Plant & Energy Management). The fully digitized TPEM power plant control and the TCG 3016 gas engine – both newly developed by MWM-interact perfectly: The data of the gas genset are read out digitally and enable constant adjustment of the plant operation and ongoing improvement of the cogeneration plant performance. 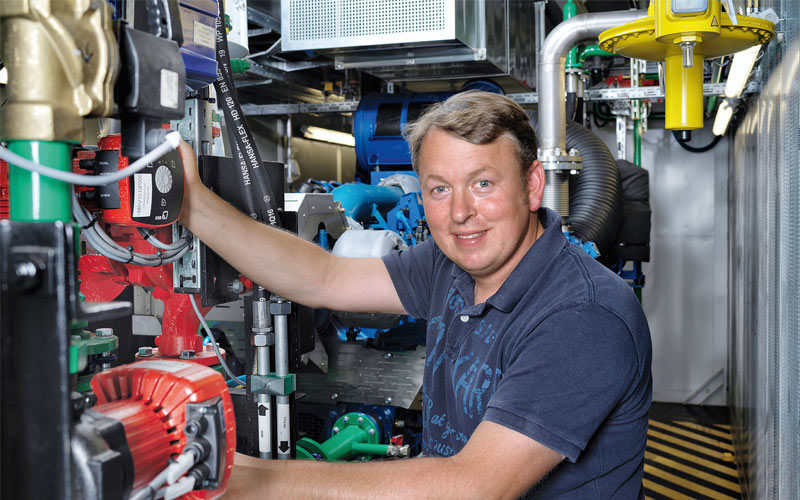 “The engine runs as smoothly as a sewing machine”, says plant operator Norbert Hack, expressing how proud he is of the newly developed MWM TCG 3016 gas engine.

With the new biogas plant for distributed energy generation, Norbert Hack can react more flexibly to the energy demand of the inhabitants of Wentorf, i.e. he is able to circumvent energy bottlenecks and prevent an energy surplus. As the lubricant temperature of the CHP plant has been reduced, the lubricant lasts longer, resulting in longer oil change intervals.

Apart from the TCG 3016, Norbert Hack also operates a smaller MWM cogeneration plant. The two cogeneration plants run independently; each of them has a separate gas train, consisting of cooling, scrubbing, and compression. Half of the substrate for the operation of the biogas CHP plant consists of cattle manure from the farm’s own cows as well as maize from the farm’s fields and from other farmers in the region.

Together with the existing plant, the new biogas genset enables more flexible power and heat production at the Wentorf site in Schleswig-Holstein.

The Hacks spread out the digestate from the biogas production on their own fields or sell it to fellow farmers in the region, closing the ecological cycle.