In early 2013, the Bitburger Brewing Group began with planning for a new CHP plant at its headquarters location in Bitburg, Germany.

The objective was to build a cogeneration plant, run on natural gas and equipped with two gas engines with an electric output of 4 MW. The centerpiece of the design: two MWM TCG 2020 V20 gas engines each with electrical and thermal output of 2,000 kW and 2,053 kW, respectively. The 400 V electricity generated is transformed to 20 kV and fed into the medium-voltage grid of the brewery. As a result, 65 percent of the electricity required at the site is covered by own electricity generation. In addition to the vast cost savings for the brewery group, the operators also had their focus on the equally significant reduction in CO2 output for the environment. Compared to uncoupled supply, the CHP plant avoids some 8,000 t of CO2 emissions annually and thus reduces the brewery’s emissions of that greenhouse gas by 18 percent. 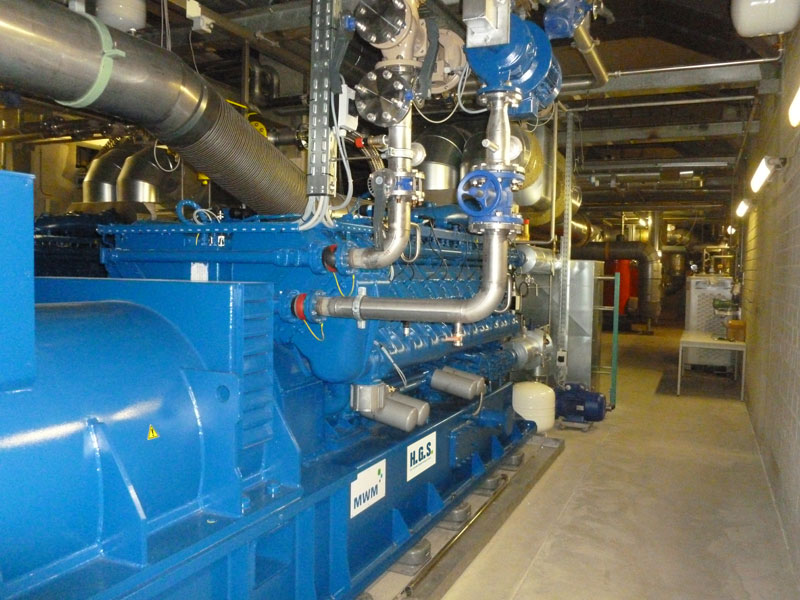 One of the two MWM gas engines of the cogeneration power plant at the Bitburger Brewery.

During the planning phase, none of the responsible managers could have anticipated the hurdles that would have to be scaled with the new project. The first obstacle came from the then environment minister and member of the Christian Democratic Union Peter Altmaier who called for the introduction of a minimum contribution as part of the Renewable Energy Sources Act. The coalition agreement concluded at the end of November 2013, however, appeared to defuse the original plans for a minimum contribution.

In December 2013, Bitburger awarded the MWM service partner H.G.S in Krefeld the contract to procure and assemble the CHP plant as designed, along with the corresponding components for heat generation. When the Renewable Energy Sources Act reform was passed by the German government, the company faced the next hurdle. The new legislation provided that as of August 1, 2014 all new cogeneration plants generating their own power would be subject to a minimum contribution of 30 percent, 35 percent starting 2016 and even 40 percent in 2017. In order not to endanger the amortization of the project, quick and professional action was required on the part of everybody involved. In cooperation with the Bitburger Brewing Group, the MWM service partner H.G.S along with the other stakeholders managed to build and set up both MWM gas engines in only two months. As a result, the plant could be commissioned well before the reform went into effect.

Special features of the CHP at the Bitburg site

In addition to its challenging planning phase, the cogeneration power plant at the Bitburg site was characterized by two additional special features: In order to tap into the full CHP potential of the brewery, the existing production processes – with the exception of the brew house heating – were adjusted to a maximum flow temperature of 98°C as a result of over 20 individual measures.

The installation of the plant was also quite a challenge to engineers and planners. Given the difficult foundation conditions, a new separate machine house would have been too expensive. That is why the CHP plant modules and the steam generators were housed in a former gas heat pumping room, which requires elaborate fresh air intake and exhaust venting. The exhaust gas heat exchanger, the exhaust silencer and the table cooler for intercooling, however, are located on the roof of the energy facility, built up at a height of 12 meters. As in all other CHP plants installed in the brewery, there was no need to install an emergency cooling installation.

For years, MWM has been a reliable partner to the Bitburger Brewery Group in all matters of distributed energy supply, and it did not disappoint its longstanding customer when it came time to build an additional plant at the Bitburg site. Now that all the obstacles have been overcome, the company anticipates that the entire investment of 5.5m euros will be amortized in five years. Bitburger is basing this forecast on the strong capacity utilization, as well as the high efficiency of the MWM cogeneration power plant, which has an electrical efficiency of 43.7% and an overall efficiency of 88%.

For these accomplishments, the Bitburg cogeneration power plant received the best-of-class award for the month of November 2014 from the German trade journal “Energie und Management” (Energy and Management).