At the end of January 2015, a very special “baby” was delivered at St. Joseph’s Hospital in Berlin: the MWM cogeneration power plant, christened “Bea”. The Berlin Energy Agency (BEA) paved the way for the installation of the cogeneration plant, and at the same time lent its name to the operation. The MWM TCG 2016 V12 natural gas fueled genset replaces the old oil fueled boiler system in this hospital, located in Berlin’s Tempelhof district, and supports its energy requirements with more than 5,200 full load hours, providing 600 kW of electrical and 654 kW of thermal output.The cogeneration plant was installed by the Berlin-based MWM partner SES Energiesysteme. 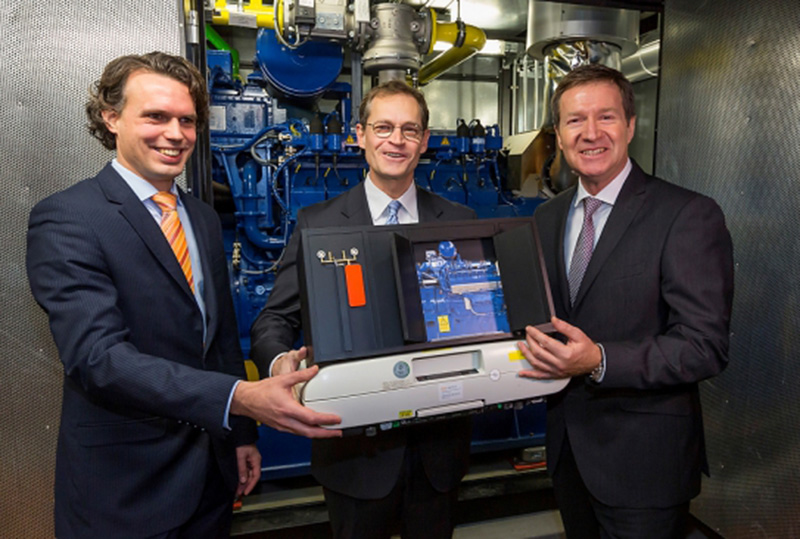 The gas engine will handle 45 percent of the power requirements in St. Joseph’s Hospital. This corresponds to 2.5 million kWh of electricity, i.e. the typical consumption of some 1,250 private households in Berlin. The rest of the electricity need is supplied via a medium-voltage grid connection. The heat generated by the cogeneration system is sufficient to meet the hospital’s basic needs for heating and warm water. This means that some 55 percent of the entire heat energy demand of 7 million kWh are generated by the MWM cogeneration power plant. The remainder of the hospital’s heat requirement is supplied by two peak load boilers, which also run on natural gas.

The greatest advantage of the cogeneration system is economical own production and use of the electricity. An additional bonus on top is that the genset was installed before Germany’s new Renewable Energy Sources Act (EEG) went into effect. Therefore, the legislation’s minimum contribution for own consumption of electricity does not apply. In all, the 485-bed hospital is seeking to save 23 percent of its energy costs by investing in the MWM cogeneration plant. The savings of €350,000 are intended to go towards future modernization measures in St. Joseph’s Hospital. BEA financed, planned and, finally, had the CHP plant installed. Additionally, it is responsiple for running the the plant technically. Energy purchase is still in the hands of St. Joseph’s Hospital.

In addition to the financial benefits, the cogeneration power plant also plays an important role towards climate protection. According to statistics from the Berlin Energy Agency, combined power generation will reduce the CO2 output of the hospital by 1,000 t per year. For BEA’s agency head, Michael Geißler, the cogeneration plant in St. Joseph’s Hospital proves that especially in a major city like Berlin, distributed power supply deserves to play an even greater role for reasons of environmental protection.