In a huge project, the medium-sized agricultural company Gebrüder Nooren GbR in the German state of Saxony-Anhalt upgraded a total of eight biogas plant locations in the metropolitan region of Central Germany. The biogas plant operation is based on the sustainable utilization of animal waste. The equipping of the biogas plant engines with power MWM TCG 3016 V12 and V16 gas engines was completed within only two years.

The biogas plant installation took place from late 2018 to spring 2020. Thanks to the upgrading at the eight locations with MWM TCG 3016 V12 and V16 gas engines in turnkey containerized cogeneration power plants, the company was able to more than double its installed electrical output from 5.2 MW to 10.8 MW. The MWM cogeneration plants are designed for flex operation of the biogas plants and serve the buffering of peak loads. The existing cogeneration power plants that are powered by MWM gas engines of an older generation are used to generate the base load.

The power produced by the biogas plants at the eight locations in the Mansfeld-Südharz and Burgenlandkreis districts is fed into the public grid. The heat from the power production is not lost, but is used on site, e.g. to heat the pigsties, offices, production buildings, and recycling facilities. Depending on the location and engine type, the electrical efficiency is 42 to 42.4 percent, and the thermal efficiency is 41.8 to 42.1 percent. The electrical and thermal efficiency output is 5.4 MW, and the total efficiency of the plants is 84.1 to 84.2 per cent. The biogas is generated from substrates consisting of liquid manure and corn. The cogeneration output of the MWM TCG 3016 V12 gas engines is 600 kWel, and the MWM TCG 3016 V16 gas engines deliver 800 kWel. The cogeneration power plants are managed with the help of the digital MWM power plant control TPEM (Total Plant & Energy Management). The MWM Service Center Erfurt takes care of more extensive plant maintenance work.

The decision in favor of new MWM gas engines was made due to the high availability of the TCG 3016 gas engines. “For us, the solution with the eight MWM biogas containers is the most efficient way to double the output of our existing cogeneration power plants and equip them for flex operation”, explains Tobias Jäsch, Project Manager Biogas at Nooren Bioenergie Verwaltungs GmbH. So far, the new containerized cogeneration power plants have run smoothly. “We are impressed by the reliability and high availability of the TCG 3016 gas engines”, says Jäsch. The advantage of the MWM biogas containers is that all components are fine-tuned to the requirements of biogas operations. Besides the standard MWM container with its gas engine, peripherals, and control panel, the service package includes a special gas treatment system for biogas. 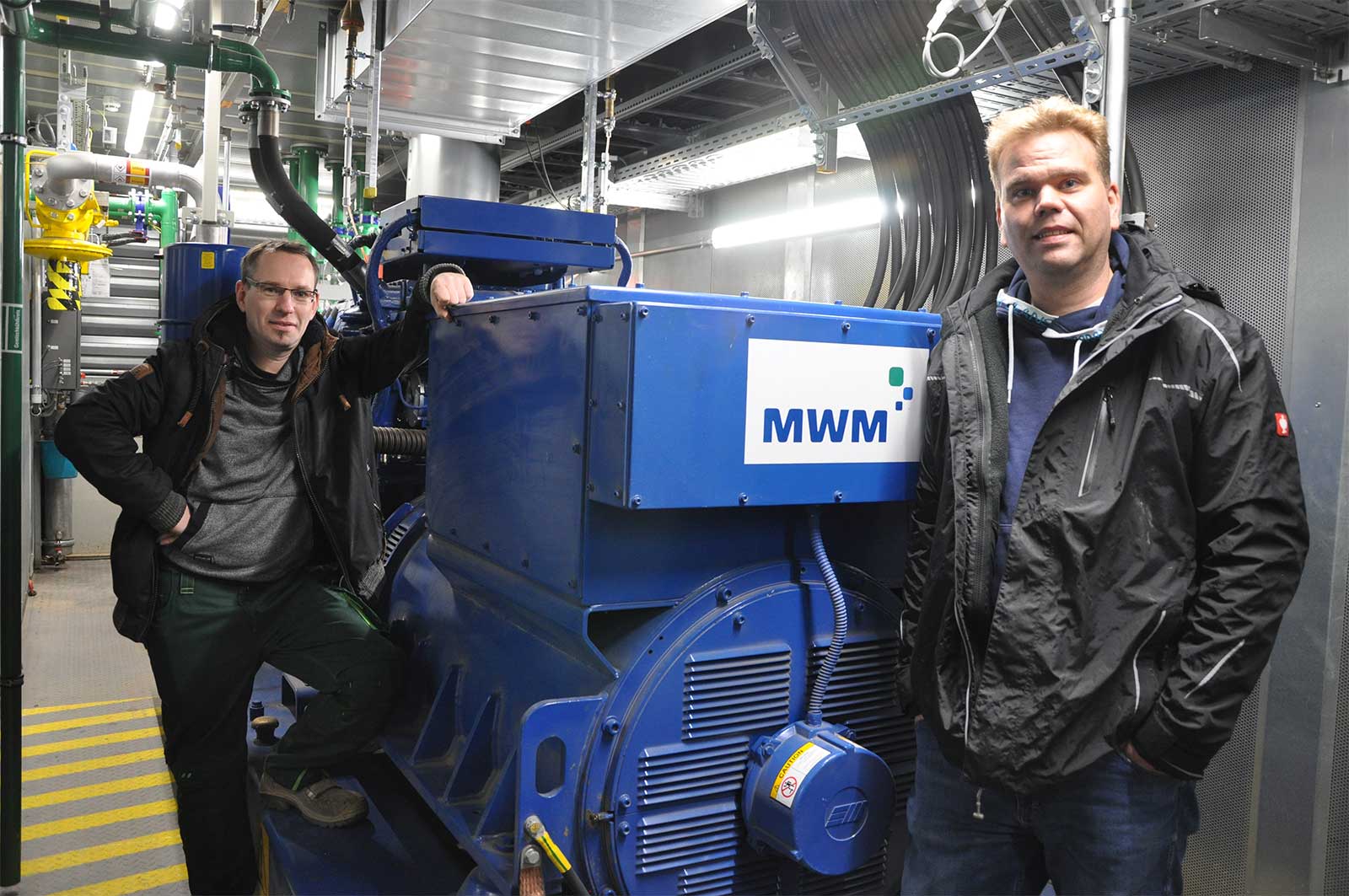 The newly developed MWM gas engines of the TCG 3016 series are more than a mere iteration of MWM’s tried and tested gensets. The new gas engines are perfectly aligned with the challenges of Industry 4.0 and the changed framework conditions of a dynamic market environment in the age of global value chains. The gas engines deliver outstanding efficiency, reliability, flexibility, and eco-compatibility in the output range from 400 kWel to 1,000 kWel. The innovative drive of the new engines is evident from the greatly reduced fuel costs, extremely low lubricant consumption, and the digitized power plant control TPEM. 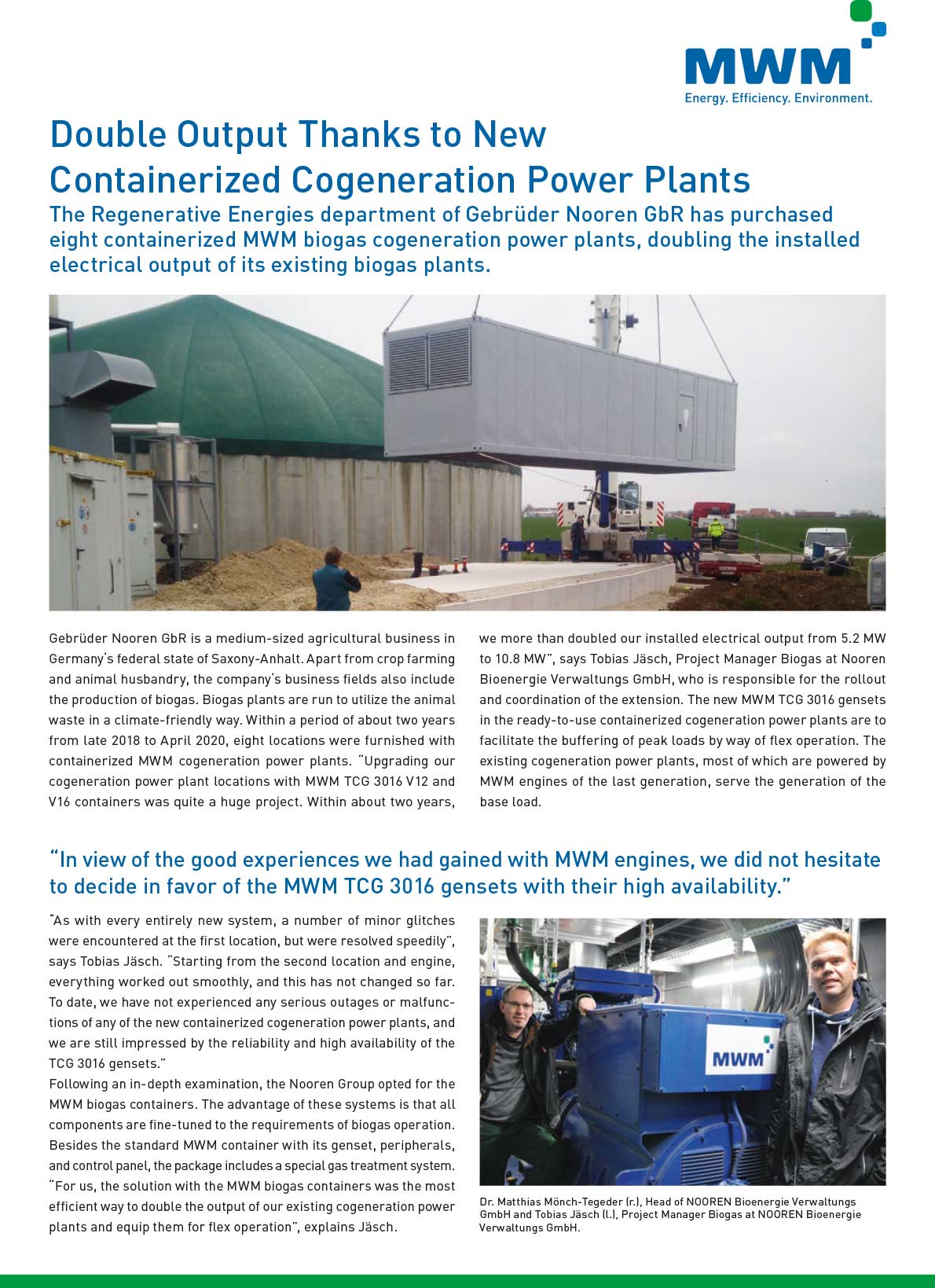