Since November 2015, a combined heat and power (CHP) plant of SES Energiesysteme with an MWM gas engine has produced eco-friendly power and heat energy in the Nordwest hospital in Frankfurt, Germany. The natural gas-fueled TCG 2016 V16C gas engine with its electrical output of 800 kWel and thermal output of 860 kWth will henceforth generate more than 5.6 million kWh of power and about 6 million kWh of heat a year, supplying the entire hospital compound, including the medical center, patient care school, and hotel. 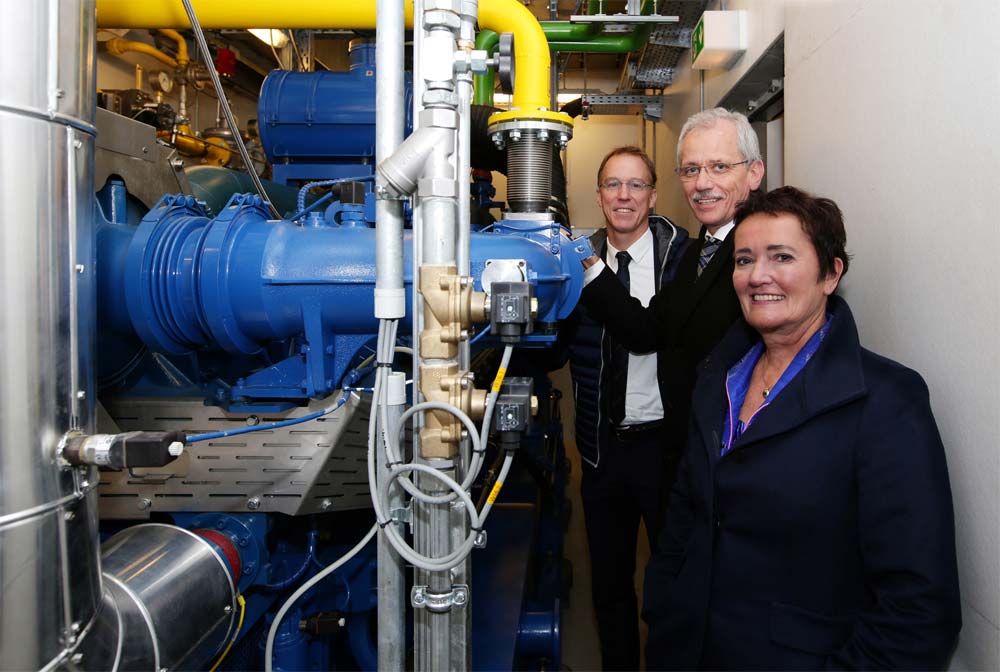 Tobias Gottschalk, Norbert Breidenbach and Rosemarie Heilig (from left) in front of the MWM gas engine TCG 2016 V16C in the cogeneration plant of the Nordwestkrankenhaus Frankfurt. (Photo: mainova AG)

The CHP plant, which was set up in collaboration with the CHP plant manufacturer SES Energiesysteme GmbH and the regional energy supplier Mainova AG, is located in a 53 m² concrete container on the hospital site. By producing its own power and heat energy, the Nordwest hospital will save about €250,000/year. Thus, the investment of €1.2 million will be amortized in about five years.

Moreover, the MWM gas engine, which transforms 90 percent of the utilized natural gas into heat and power, will reduce carbon emissions by 1,300 t/year. At the inauguration of the CHP plant, Rosemarie Heilig (The Greens), Head of the Health Department and Chairwoman of the Supervisory Board of the City of Frankfurt am Main, personally endorsed the gensets. Heilig told “Frankfurter Neue Presse” that plants like this one contribute greatly to the climate protection of Frankfurt. Besides industrial factories, the city’s hospitals are among the largest energy consumers. Her objective is to convince even more hospitals and other municipal enterprises of the eco-friendly power and heat energy generation with natural gas-fueled CHP plants.

The project owners are proud of the new flagship project of the Nordwest hospital – especially in view of the great challenge that the installation of the CHP plant posed. This was because construction or upgrade work must never impair or inhibit the operations of the hospital, in which 580 patients rely on the flawless operation of all medical equipment. Furthermore, the combined heat and power plant was required to fulfill very high noise emission standards. Thanks to the flexibility and reliability of the responsible people, the CHP plant was installed without any problems.

Read more on this project in a “Frankfurter Neue Presse” report (in German):
http://www.fnp.de/lokales/frankfurt/Ein-Kraftwerk-fuer-das-Krankenhaus-Nordwest;art675,1679168