Update: German Award for Business Communication: MWM thanks the jury for the finalist nomination and a great event

On June 23, the award ceremony of the German Prize for Business Communication 2022 took place in Berlin. MWM congratulates all winners of the award and would like to thank the DPWK jury for the finalist nomination as well as for the invitation to a very interesting and exciting evening.

On May 18, 2022, the jury of this year’s German Award for Business Communication (Deutscher Preis für Wirtschaftskommunikation – DPWK) announced the companies shortlisted for the final of the upcoming award ceremony in summer. With its MWM brand campaign, Caterpillar Energy Solutions GmbH is one of six nominated finalists in the “Internal Communication” category.

Even in the tradition-rich German engineering industry, the 150th anniversary of MWM was a remarkable occasion. The 150th anniversary of MWM provided a fine opportunity to highlight the company’s specific capabilities and services and to draw the target groups’ attention to Caterpillar Energy Solutions and the MWM brand by means of systematic internal and external communication measures. According to Frank Fuhrmann and Aljoscha Kertesz, who were responsible for the campaign, the objective was to utilize the outstanding potential offered by the corporate history in the company’s communication, especially at the emotional level. Under the mission statement “150 Years of Continuous Innovation”, the perspective thus included both the past and the future. 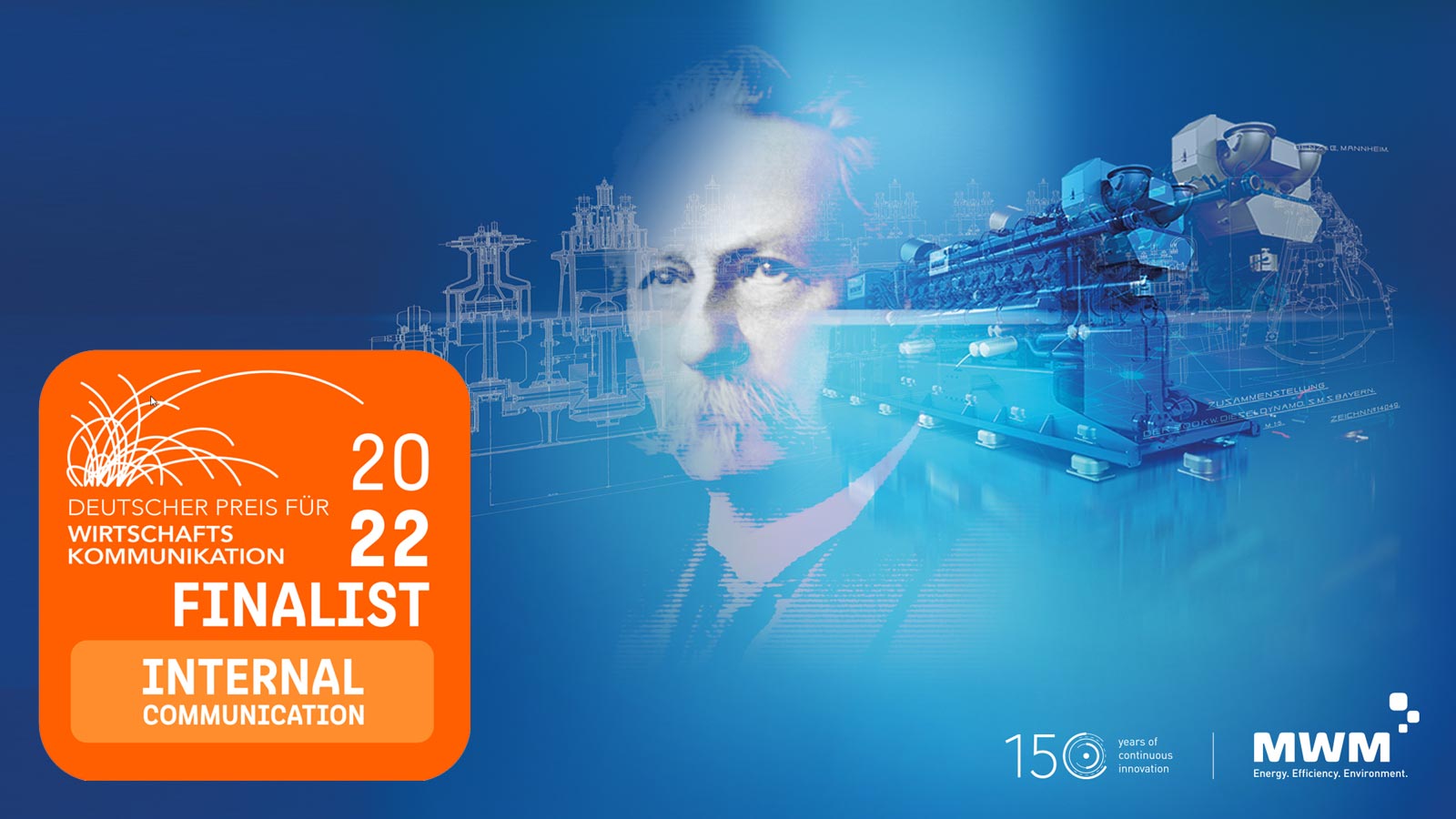 Glance at the Past, at the Present, and Especially at the Future

When automobile pioneer and inventor Karl Friedrich (Carl) Benz founded his “Mechanical Workshop” in Mannheim, Germany, it was an entrepreneurial adventure that led him and his business partner and spouse Bertha Benz on a path of innovation and change.

2021 marked the 150th anniversary of the company’s foundation. In 1871, Carl Benz had set out on his quest for a “horseless carriage”. In 1886, he registered a patent for the automobile (imperial patent 37435). His epoch-making invention triggered the dawn of the age of transportation—a milestone comparable to today’s mobility and energy transition.

Now, 150 years after the company’s foundation, the spirit of innovation is still alive and well on the premises on Carl-Benz-Strasse in Mannheim. Around the globe, MWM stands for highly efficient gas engines and eco-friendly combined heat and power (CHP) plants for distributed energy generation. Caterpillar is proud to have the MWM brand as part of its group portfolio and greatly desired to celebrate this anniversary with the staff, the company, and the people who are committed to the MWM brand.

“The aim of our anniversary campaign was to align the touchpoints of all communication measures with our internal and external stakeholders and target groups along the entire customer journey”, says Frank Fuhrmann, Manager PR & Online Marketing. This means that the company’s entire presence and its portfolio of gas engines and CHP plants had to be developed in this direction. All measures of the anniversary campaign were consistently tuned to this overall strategy. In the anniversary year, the design and contents of all communication measures were thus revised.

Overview of the MWM Anniversary Campaign

Unfortunately, the pandemic made it impossible to hold the planned anniversary celebration in 2021. Moreover, the family party—which the traditional manufacturer of gas engines normally celebrates every four years in order to motivate and encourage the interchange between executives, employees, and their families—had to be canceled.

Nevertheless, various measures were taken to stimulate the employees and to leverage the anniversary year to strengthen their bond with the company. “The employee opinion survey conducted throughout the group at the end of the year reveals that the value of the bond with the company could be stepped up by more than 4 percentage points”, explains Aljoscha Kertesz, Manager Communications & PR.

In numerous e-mails, at the works meeting, and in the social media, employees praised the book and the film, drawing attention to the positive impression these have made. Within the first weeks of the publication, the German-language anniversary video on YouTube achieved more than 2,750 clicks, and the English version that was uploaded later on achieved similar success.

Active assistance in the design and rollout was obtained from an experienced team comprising the Frankfurt-based agencies BRANDCONTRAST GmbH and TMC The Marketing Company GmbH & Co. KG, Mannheim-based Filmproduktion Motionplan GmbH & Co. KG, and others.

Award Ceremony of the German Award for Business Communication (DPWK) on June 23, 2022 in the Club Theater Berlin

This year, the award ceremony will take place on June 23, 2022 in the Club Theater Berlin in the presence of 500 invited guests. During the final, 48 companies and associations will showcase their most promising prior-year campaigns in eight categories. For the first time, a special award is in store for the FLINTA* Empowerment Communication category. By means of this award, the German Award for Business Communication (DPWK) wants to underline its commitment to acceptance and openness in business communication. All finalists have been selected by way of an independent, complex assessment process in which the measures of the individual campaigns are evaluated. The objective is to reward the campaign’s entire communicative and creative impact.