At the beginning of December, three MWM TCG 2016 gas engines were commissioned in an existing cogeneration or CHP plant in the industrial zone “Am Wilhelmschacht”. The gas engines – TCG 2016 V16 and two TCG 2016 V12 units, each weighing 7 to 9 t – were ordered by the Borna municipal utilities and delivered in early November 2016. About a month later, the CHP plant, which had been planned and installed by ETW Energietechnik GmbH, was ready for test operation. The installation required highly precise work and perfectly coordinated collaboration of all involved.

The special challenge in Borna was to precisely integrate the heavy gas engines in the existing cogeneration plant. The new gas engines were installed in the place of three MWM gas engines that had been installed 20 years ago and that had done their job tirelessly since 1996. However, these engines were no longer up to date in terms of environmental technology and were thus unable to fulfill climate protection requirements. The natural gas-powered gas engines had been in use for a total of about 83,000, 85,000 respectively 86,000 operating hours. The work accomplished by each of them corresponds to a distance of 4.2 to 5 million km by car.

So it was time to replace the engines in order to ensure reliable power generation for the inhabitants of Borna. The town invested €2.5 million for three new MWM TCG 2016 gas engines. Henceforth, these consumption-optimized engines will continue to generate power and heat energy, while at the same time making an important contribution to local climate protection.

For the successful installation of the gas engines in the existing CHP plant, components such as the exhaust heat exchanger and the air chiller had to be integrated in the cogeneration plant. Though this step took relatively long, the time lost could be compensated by the fact that the power generated during the test run could already be fed into the public grid. While the programmers and plant engineers of the long-standing MWM partner ETW Energietechnik GmbH conducted additional tests and installed the ceiling insulation of the CHP plant, the cogeneration plant was already able to generate power and heat for the people of Borna. “ETW Energietechnik is one of our skilled partners in the market for independent energy supply for large energy suppliers, agricultural plants, municipalities, and industrial enterprises of various types and sizes. The company boasts long-standing experience in the utilization of regenerative and fossil fuels such as biogas, landfill gas, sewage gas, and other special gases such as natural gas and mine gas”, explains Steffen Prieske, MWM Sales. 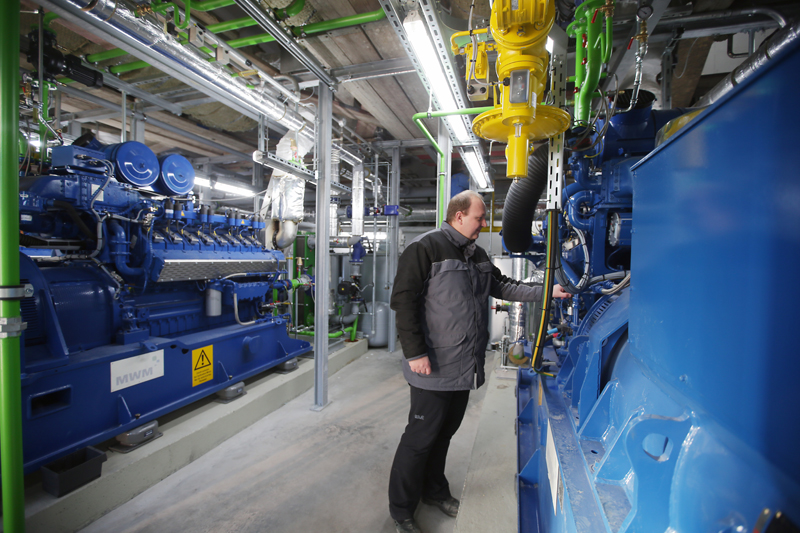 Just before the restart of the cogeneration plant: Checking some last details before the three MWM gas engines go live for the test run (photograph: Jens Paul Tauber).

For the municipal utilities of Borna, the completion of the construction work by no means signals the end of the modernization efforts. For 2017 and 2018, further measures are planned for the town’s second CHP plant.