For decades, the Medium-Voltage Guideline specified that CHP systems needed to be taken off the grid immediately in the event of trouble. Special protective devices, such as vector jump relays, were developed and used to ensure quick disconnection. In power grid technology, CHP plants were considered to be “negative consumers,” which meant that they reduced the consumer load.

As a result of the ongoing decentralization of power generation systems, such as photovoltaic, wind and CHP, decentralized systems are becoming more and more important in the power generation industry. This is reflected by the requirements set forth in the guideline “Generating Plants Connected to the Medium-Voltage Network” (BDEW Technical Guideline, rev. June 2008, with a 4th version scheduled to take effect Jan. 1, 2013).

According to this Medium-Voltage Guideline, CHP systems must be part of the static and dynamic grid support system, just like wind, hydro and photovoltaic systems.

The technical requirements for static and dynamic grid support will shift requirements to the generation set (natural gas engine and generator) and to the plant operating mode. In the past, CHP plants were designed for maximum efficiency and power at cosϕ = 1.0. The revised version of the Medium-Voltage Guideline will add new requirements, such as extended voltage and frequency ranges, power reduction via frequency control, external power feed-in control, variable cosϕ and dynamic grid support. If a voltage dip above the specified curve occurs in dynamic grid support, the CHP must remain online and must be able to follow the voltage curve shown below in the event of an FRT event (fault ride-through). 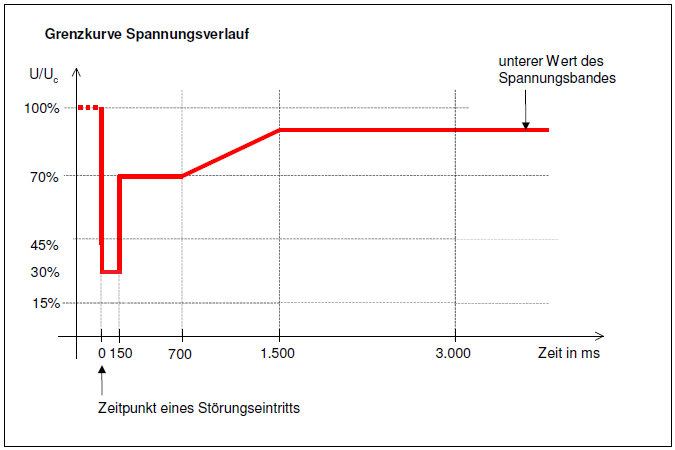 Dynamic grid support places particularly high technical demands on the gensets. These units must be designed to comply with the FRT requirements, and compliance must be verified by a certifying organization. MWM already began initial tests on the new requirements applying to CHP plants in 2010 in order to obtain knowledge and experience on FRT behavior.

The tests were performed on an actual power grid. The voltage of the grid was reduced to the given test value by means of a test container, and the behavior of the genset was measured.

Measurements and the simulations show that the genset supports the grid voltage at a level of about 55% when voltage at the grid connection point dips to 30% for 150 msec. In this case the generator voltage is about 67% of the nominal value (Fig. 2). The generator current increases to 4.7 x In (nominal current) (Fig. 3). Figures 4 and 5 show the rpm variations and the angular displacement. 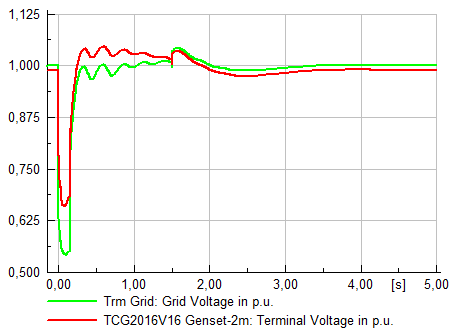 Fig 2: Voltage at the grid connection point and at the generator 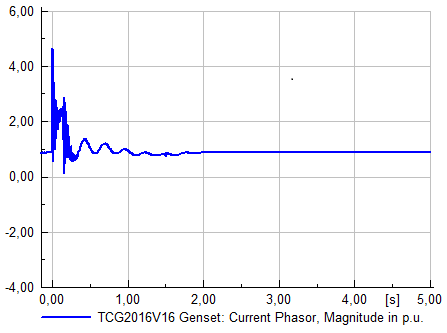 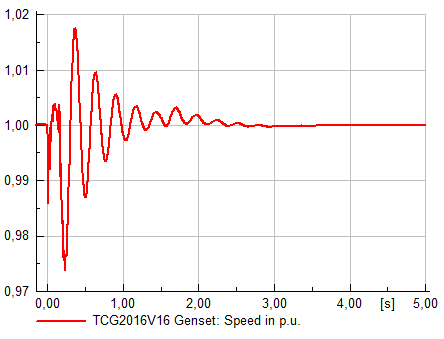 Fig. 5: Angular displacement of the generator

Based on the measurements and the simulations, the MWM design series were tested in a timely manner, and the design was modified.

Therefore, beginning 2013 MWM gensets will comply with the new Medium-Voltage Guideline and make their contribution to grid stability. The required reactive power will also be provided.

The certification requirements were still pending as of our press date. The MWM gensets will be certified per TR8 over the medium term so that the certificates will be available by January 1, 2014.

Aside from the Medium-Voltage Guideline that applies to Germany, in other countries within and outside of the EU there are also country-specific specifications that apply to the conditions that must be met for parallel operation on the grid. More and more countries are revising these specifications in light of efforts to supply decentralized renewable energy.

In Europe, the European Network of Transmission System Operators for Electricity (ENTSO-E) has compiled corresponding specifications. The general requirements that must be met by country-specific guidelines/specifications are defined in the “Network Code for Requirements for Grid Connection Applicable to All Generators”. After this Network Code takes effect, it must be taken into account in country-specific guidelines.

Given that the specifications are currently being revised or issued for the first time in many countries, it will probably be necessary in some cases to individually document compliance with the specific requirements.