Moving in many small steps towards better assembly

By 2018, MWM plans to double its engine output – above all in the range of mid-sized engines. Until then, there is still potential for improvement in various instances within the assembly process. An MWM team and an outside consulting firm identified opportunities for optimization with respect to the flow line and cycle times in mounting assembly of the TCG 2016 gas engine and implemented them in the scope of a workshop. We spoke with Julian Wagner, Project Manager at MWM, about the objectives, the implementation, and “getting rid of old habits”… 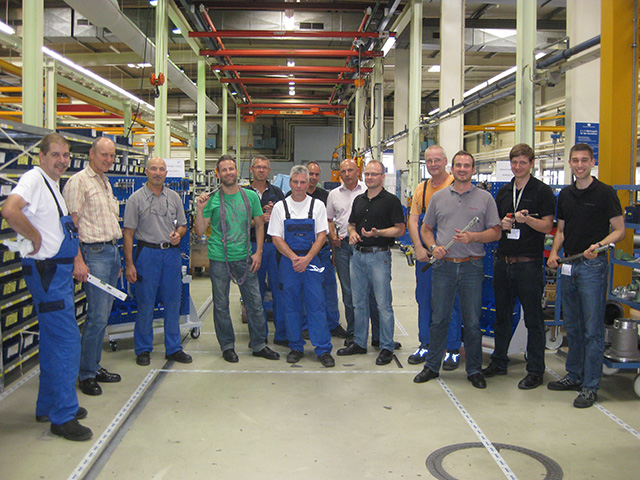 A total of 14 people participated in the “2016 TCG Engine Assembly Optimization” project.

MWM Newsflash: Mr. Wagner, in August, the mounting assembly for the TCG 2016 was stopped at MWM for one week as part of a workshop, in order to improve work flows. Did the implementation proceed the way you planned it?

Julian Wagner: Yes, it worked very well. After all, we were a complete team consisting of 14-15 people. The workshop week in August was set aside strictly for the implementation on site, but naturally we already began the preliminary work and planning much earlier. Our stated objective was to optimize the mounting assembly of the TCG 2016 gas engine according to the principles of “lean manufacturing”. And we achieved this objective.

MWM Newsflash: What has changed on the assembly line?

Julian Wagner: Previously, gas engines were manufactured in stationary work stations. This had several disadvantages, and required lots of space and high logistical overhead. The decisive downside, however, was that manufacturing was not optimally adapted to the customer’s production pace, i.e. demand. We have improved this through the introduction of assembly-line production. It was important to us to minimize non-value adding work time and to optimally utilize the available space. We have broken down the assembly process into several smaller work steps and analyzed and optimized each of them in terms of their potential. Material supply, as well as material and product transportation, were closely examined and improved. For this purpose, our own suppliers – transportation, logistics, etc. – were included in the project. Only when all those involved in the process are informed and make a concerted effort, can the implementation be a success. 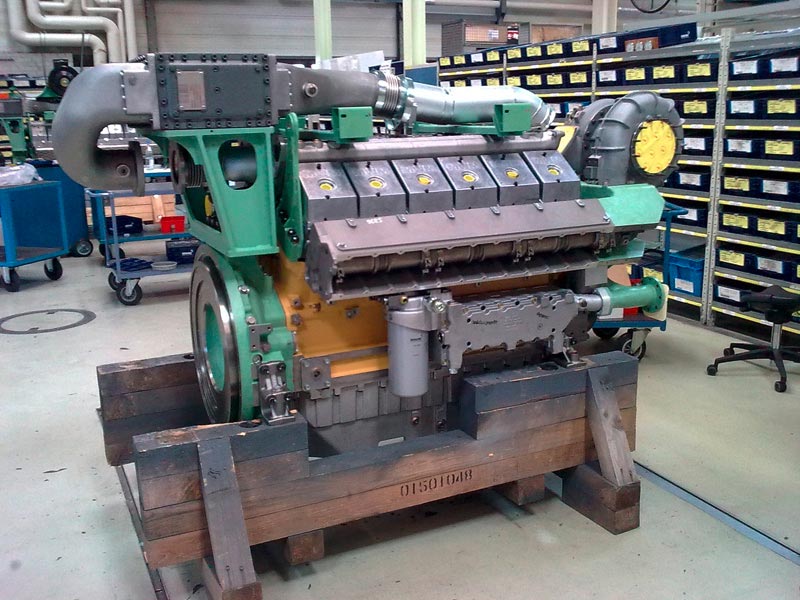 Before: Stationary assembly of the TCG 2016

Julian Wagner: Through the introduction of assembly-line production, we were able to reduce the throughput time, the engine inventory and the required space. Individual measures, for example, are the use of movable assembly dollies for the gas engines with flexible racks that can be used for all variants. The introduction of standardized and optimized work routines shortens the required cycle time. Specifically defining the assembly space and clearly marking the area for employees, engines, material and tools decreases the space requirement nearly by half. In order to reduce search and travel times, only required, standardized tools were introduced on ergonomic tool boards per station. In addition, we introduced logistics vehicles for each assembly station, with clearly-marked surfaces for placing the components on the vehicle. This ensures that material supply is tailored to each assembly step. By eliminating all non-essential materials, it was possible to reduce the amount of Kanban shelving by half. In many small, well-devised steps and measures, we thus came much closer to our objective of a lean, demand-oriented mounting assembly.

After: Through the switchover from stationary to line assembly, MWM has come much closer to its objective of a lean, demand-oriented mounting assembly of the TCG 2016.

MWM Newsflash: How were the employees involved in the mounting assembly?

Julian Wagner: The employees were already involved in the planning phase, and especially in the implementation week, of course. We presented our concept and precisely laid out where the weaknesses are in the current assembly and where the changes and improvements are called for with the new production philosophy. Now, for example, the tools necessary for a particular assembly station are placed immediately within reach. They are made available on a tool board – tailored to each station. This naturally meant an adjustment, especially for employees who have been here for many years, so we had to rid ourselves of old habits, so to speak.

MWM Newsflash: Introducing a new assembly system is a complex process. How is the implementation monitored? Julian Wagner: Because we make our employees the focus on the assembly line, we also count on self-discipline for the monitoring of the measures for improvement. Employees should first of all check individually that their own measures have been carried out, as after all, these are intended to make their work easier. Foremen and the head of production naturally have their own inspection mechanisms. But not only the assembly line workers are called upon to ensure implementation; our own suppliers must also do their part. The switchover from stationary to line assembly is, as you have already pointed out, a complex process that will not function totally smoothly overnight. Many interfaces must still be optimized, and all departments directly or indirectly involved in assembly must also implement and constantly optimize the new system in the future. But I am truly excited how much we’ve already achieved in such a short time. We were able to considerably improve the material supply and the material transport to the line and, by doing so, boost the process quality and cut down on non-value adding work time. All employees have helped to keep the production downtime as short as possible.

MWM Newsflash: Thank you, Mr. Wagner, for your time. 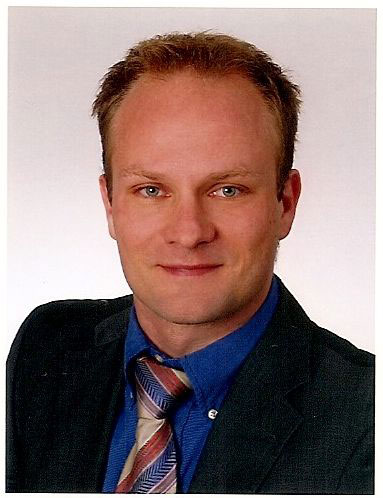