Three cogeneration power plants supply the approximately 43,000 inhabitants of Nordhausen, Thuringia, with power and heat. The combined heat and power (CHP) plants are operated by Energieversorgung Nordhausen (EVN). The oldest natural gas power plant “Mitte”, which mainly supplies housing societies, smaller businesses, and private homes with energy, underwent a general overhaul in 2017, after 24 years of operation. For this purpose, Energieversorgung Nordhausen had four new MWM TCG 2020 V20 gas engines installed without halting the operation. The introduction of a new cogeneration law provided an additional motivation for the overhaul of the cogeneration power plant. “As we had already worked with MWM engines from Mannheim, we knew how reliable and efficient the gas engines would be”, explains Hands-Jürgen Mund, Technical Manager Heat of EVN. 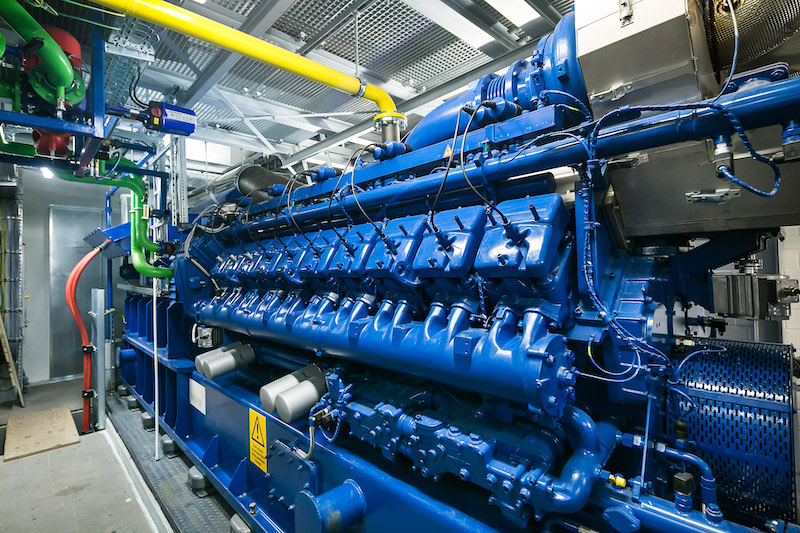 In the course of the general overhaul of the cogeneration power plant “Mitte”, four new MWM TCG 2020 V20 gas engines with a total output of 8,000 kW were installed. The engines ensure secure, continuous energy supply of the city of Nordhausen. © Jan Kobel

The four MWM TCG 2020 V20 gas engines have a total output of 8,000 kW. The natural gas-fueled engines boast an overall efficiency of 87.1 per cent. Each engine has a thermal and electrical output of 2,000 kW. The series meets the high demands of a broad application spectrum and delivers outstanding reliability, efficiency, flexibility, and environmental compatibility. Thanks to its optimized engine parts, the TCG 2020 consumes up to 50 percent less lubricant than comparable gensets, resulting in long-term cost advantages. Moreover, it features low lifecycle costs and high profitability. The engines are thus custom-tailored to the challenges of a dynamic market setting.

To guarantee hassle-free, reliable power and heat supply in Nordhausen, a full maintenance agreement has been concluded with the MWM service center in Erfurt. The operation of the cogeneration power plant was smoothly resumed on October 27, 2017 after a total conversion period of eight months. “The new MWM TCG 2020 V20 gensets deliver improved performance and are more eco-friendly” says Hans-Jürgen Mund. “Thanks to the engine replacement, our energy supply in Nordhausen is now based on state-of-the-art technology.” 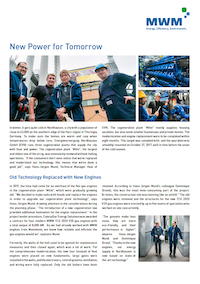