After two years of continuous development, the new version of the TCG 2032 (the largest MWM genset) was launched in January 2012. Optimized spark plugs and improved turbocharger technology have made electrical efficiency of up to 44.2% possible with an output of 3,333 to 4,300 kWel. Thanks to the superb operational experience gained with the predecessor versions, the running time before major overhaul has been increased from 64,000 to 80,000 operating hours.

The basic customer requirement at the beginning of the project was for improved load response capability in the gensets with a simultaneous increase in electrical efficiency under full load. This led to the task of increasing the reserve boost pressure of the turbochargers under part load to enable higher load impacts and higher load shedding. It was however necessary to reduce losses at the throttle valve in continuous operation at 4,300kWel in order to achieve greater efficiency. At the same time, the gensets should have sufficient reserves at full load to absorb short-term fluctuations in temperature and gas quality without affecting the output.

Three key measures were derived from these requirements: to adapt the exhaust gas turbocharger, to modify the geometry of the MWM pre-chamber spark plugs and to introduce a multi variable controller to simultaneously regulate key actuators such as the throttle valve, gas mixer and wastegate.

The two exhaust turbochargers installed as standard in the TCG 2032 V12 and V16 were fitted with a new exhaust turbine. Improved efficiency on the exhaust side automatically increases the boost pressure on the compressor side of the turbocharger. The higher boost pressure has a particularly positive effect in the part-load range when the load is increased or reduced. The proven MWM pre-chamber spark plug was re-engineered as well as the turbochargers. This pre-chamber principle enables higher efficiency yet with less maintenance and less peripheral equipment. The adapted geometry of the spark plug accelerates and stabilizes combustion in the TCG 2032. This also results in better utilization of the gas-air mix in the combustion chamber and therefore greater efficiency in the engine.

The most comprehensive change in the new version of the genset is the introduction of a new controller which combines and connects the previously separate controllers. Access to the control elements on the engine was previously via the engine output, speed, emissions and load pressure controllers (though these were separate). In the event of a load impact, first the throttle valve was opened completely, then the gas mixer adjusted and the exhaust wastegate closed too late. By combining the controls into a multivariable controller, however, all the actuators are addressed by one controller and work together from the start to respond to a given requirement. This means that the individual load levels can be increased and only 9 levels are now required.

The absolute increase in efficiency achieved by these measures in the TCG 2032 series amounts to 0.7%; with immediate effect the gensets will be offered with an electrical efficiency of up to 44.2%. In addition to fuel costs, which can be reduced significantly through the efficiency of the engines, the service costs play a decisive role in the overall operating costs. Short down-times during servicing and therefore high availability are guaranteed by the simple service concept with fully replaceable cylinder units and fewer separate components. Regular maintenance is now performed only every 4000h (maximum twice annually). Previously, a major overhaul was required after 64,000h, which is roughly equivalent to 8 years of continuous operation. Thanks to the accumulated experience and evaluation of large amounts of operating data, the time to major overhaul has now been increased to 80,000h. This can reduce service costs by more than 30% within the first 10 years.

The new version of the TCG 2032 with improved efficiency, higher load switching levels and 80,000 operating hours to major overhaul has been available to order and ship since January 2012. 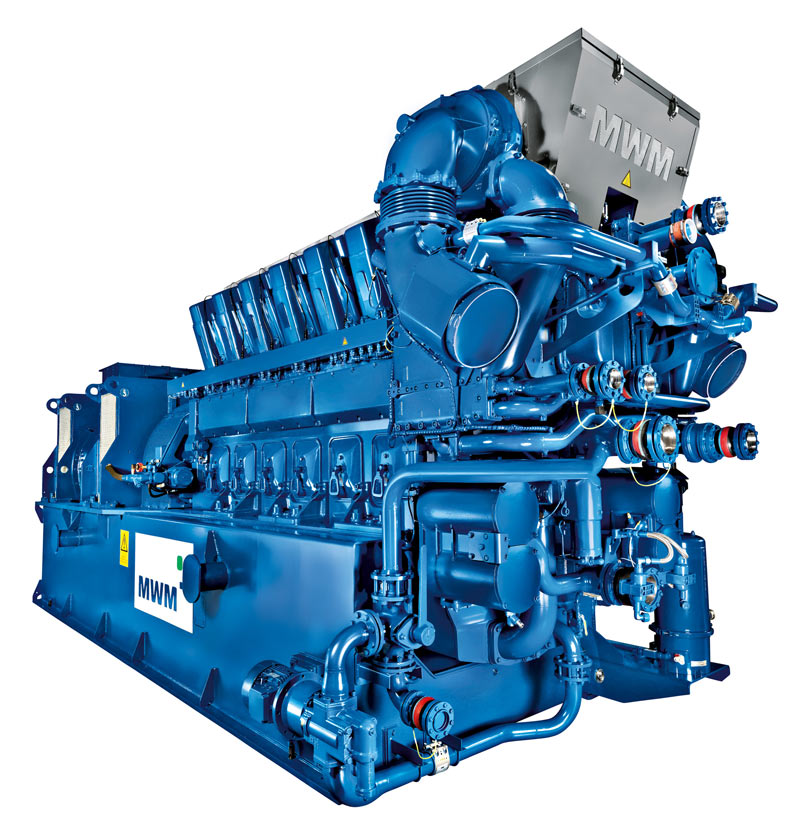