In collaboration with A.EI.M.A SA, MWM installed and commissioned a new CHP (combined heat and power) plant for the large tomato producer Karditsa Gardens S.A. in Greece in March of this year. On an area that equals five soccer fields (50,000 m²), some 3,000 t of tomatoes are to be produced hydroponically every year. The turnkey CHP plant for the greenhouse has a total output of 4 MWel. The greenhouse was designed by the Greek engineering and construction company Orion A.T.E. 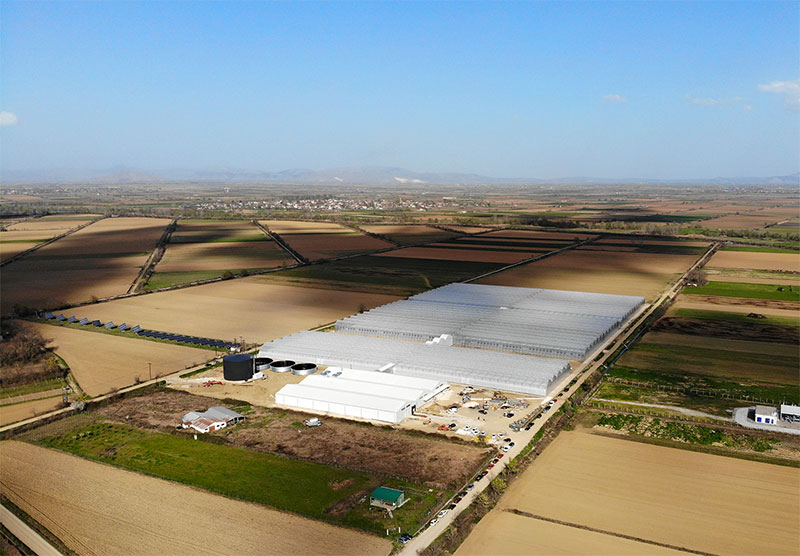 The CHP plant consists of two MWM TCG 2020 V20 (HE) gas engines, which were developed and installed by A.EI.M.A. SA, the Greek distributor for MWM products and by MWM Benelux B.V., the MWM subsidiary in the Netherlands. For A.EI.M.A. SA, this is already the second CHP project for the hydroponic cultivation of tomatoes in Greece. The CHP plant of Karditsa Gardens S.A. generates 4 MWel of power. Thanks to the electrical efficiency of 44 percent, the fuel consumption remains low. The heat recovery technology ensures a total efficiency of more than 90 percent even when the temperatures are low. The thermal energy from the engine is transmitted to the greenhouse and used to heat and promote the tomato growth in the best way possible. Furthermore, the electrical power is sold and fed into the national distribution grid. The selective catalyst reactors (SCR) of the natural gas-fueled MWM gas engines enable the use of the carbon dioxide released from the engine exhaust gas for organic carbon fertilization of the plants after due treatment, which has a positive effect on the production.

Agriculture plays a significant role in the Greek economy, with, agricultural products such as olives and olive oil, wine, strawberries, kiwis, avocados, water melons, and tomatoes accounting for 22 percent of the Greek exports. With a harvest of about 900,000 t of tomatoes a year, Greece is Europe’s sixth-largest (2018) tomato producer and ranks just under the Netherlands. The installation of efficient CHP plants in greenhouses is a key factor to boost the competitiveness in the fruit and vegetable sector, both at the national level and internationally. 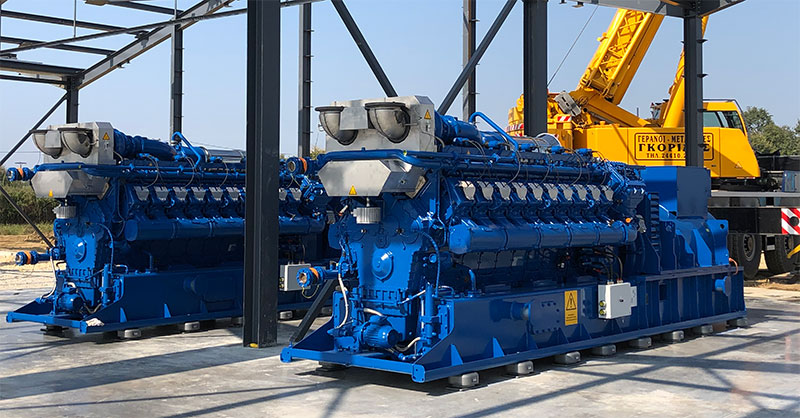 The MWM TCG 2020 V20 gas engines for the CHP plants were installed within just two months and have been generating heat for the greenhouse facilities since the beginning of the year. (Photograph: Karditsa Gardens S.A.)

The heating of greenhouses consumes a lot of energy. Additionally, the water used for watering the plants needs to be pre-heated, and sales spaces also need to be heated. The electrical energy is mainly used for illumination and compressed air, for the operation of burners, and for control purposes, or, as in this case, is sold and fed into the energy grid. Through installation of a CHP plant that runs on clean pipeline natural gas, the operating costs can be reduced, and the plant cultivation can be optimized. Apart from the autonomous generation of heat and power for internal needs, the possibility to use the combustion products of the utilized natural gas is another great advantage. For example, following a scrubbing process, the exhaust gas can be used as fertilizer to promote plant growth. MWM gas engines can provide electrical energy for electrical loads, heat energy for heating greenhouses, and recyclable carbon dioxide from the exhaust gas for use as organic fertilizer.

MWM offers custom-tailored CHP energy solutions including the needed mechanical equipment and controls to extract the engines’ thermal energy and transfer it to a greenhouse. Additionally, MWM’s solutions comprise the required exhaust gas processing as well as switchboards and controls for supply companies that sell the generated excess electrical energy to the local power grid.