The financial year 2017 was a significant year for MWM in several respects: With its new and enhanced gas engines and the implementation of new services and technologies, the company and its cogeneration power plants have entered the digital age of Industry 4.0. In 2017, the Mannheim-based gas engine manufacturer rolled out numerous extraordinary, highly innovative distributed energy supply projects in collaboration with its service and distribution partners. Some of these energy projects won prestigious awards for their advanced ecological sustainability, technological innovation, and meticulous technical implementation.

Since 2017, the further development of the TCG 2032B V16 and TCG 2020 V12 gas engines has enabled improved efficiency, significant fuel savings, and lower maintenance and installation costs of these gensets. As a result of the adjustment of the TCG 2020 V12 to a maximum output of 1 MWel (from previously 1.2 MWel), the temperature in the mixture cooling circuit can be raised to 50°, which not only enables savings related to the basic price of the gas engine and the plant engineering but also reduces the risk of condensation in tropical regions. From the operator perspective, an especially impressive aspect of the optimization of the TCG 2032B V16 is the fact that the increased electrical efficiency enables savings of up to €30,000 for fuel alone.

Gas Engine TCG 3016: Dawn of a New Age on the Market for Distributed Energy Solutions

November 8 doubtlessly marked one of the most important milestones for Caterpillar Energy Solutions in 2017. Since then, the MWM gas engines of the TCG 3016 series have been available from dealers and via MWM direct sales, proving that MWM is prepared for the challenges of Industry 4.0 and the changed framework conditions of a dynamic energy market in the age of global value chains. With its digital power plant control TPEM (Total Plant & Energy Management) and the newly developed gas engine TCG 3016, MWM has stepped into the age of comprehensive digitization of cogeneration power plants. 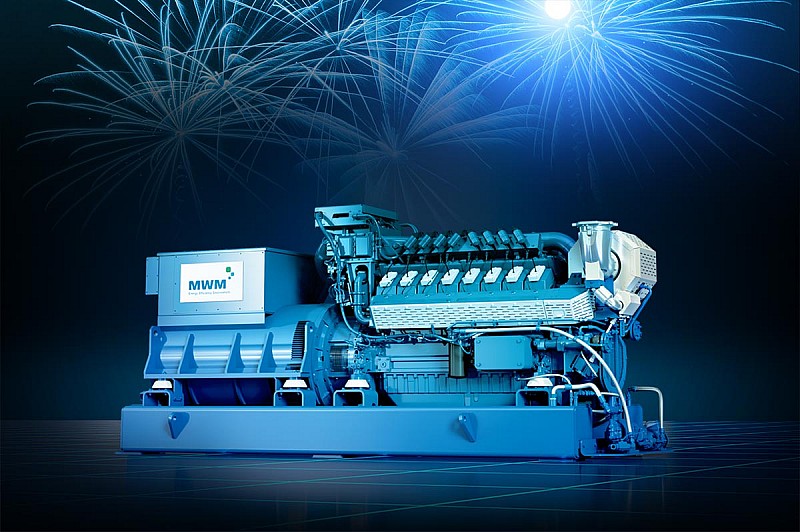 Apart from its product portfolio, MWM’s range of services was expanded as well in 2017. For example, the MWM plant check, which is performed by specialized staff, ensures custom-tailored optimization measures and thus higher availability and profitability of MWM CHP (combined heat and power) plants. Moreover, MWM has further expanded its customer service with its MWM Premium Antifreeze -20 high-performance coolant and the MWM Premium GMO 240 and MWM Premium GMO 440 high-performance engine oils.

Basically, every CHP plant for distributed energy generation is a unique project, as the installation team always needs to take the individual conditions and requirements on site into consideration. However, some projects are especially noteworthy.

In London, a 600-kW MWM TCG 2016 V12 gas engine installed in the former BBC building, where TV history had been written for more than 50 years, supplies White City with sustainably generated energy. The gas power plant operators expect to reduce carbon emissions of this district in North London by 35 percent.

The field of health care and medical research is increasingly making use of efficient energy solutions with CHP plants. In 2017, for example, the University Medical Center Göttingen installed a highly efficient MWM cogeneration power plant with a total efficiency of 90 percent. From early 2018, the cogeneration power plant will not only generate most of the required power and heat energy, but also cooling energy for the medical facility.

Another highlight of 2017 was the conversion of the former “Engelsburg” air-raid shelter in Lübeck into a high-performance CHP plant. The plant now supplies 1,200 households with decentralized energy from the energy bunker, whose core consists of an MWM TCG 2020 gas engine with a thermal output of 2.5 MW.

“Energie und Management” (E&M) magazine designated the energy bunker in Lübeck with its MWM gas engines as the “Cogeneration Power Plant of the Month June”.

Moreover, long-standing MWM partner Edina received the award of the UK Association of Decentralised Energy (ADE) for a CHP plants running on MWM gas engines. For the third time in a row, Edina, the long-standing partner and leading dealer of MWM gas engines and combined heat and power plants in the UK and Ireland, has received the renowned Association of Decentralised Energy (ADE) award in London, UK. With its outstanding, trend-setting concepts for decentralized energy supply with cogeneration power plants, Edina excelled in two categories: “Industrial Project of the Decade” and “Visionary Project of the Year.”

The entire MWM team is proud of its achievements over the past 12 months and is looking forward to even more innovation on the market for gas engines and cogeneration power plants in 2018. MWM would like to thank its partners and customers for the support they provided throughout the successful year of 2017. Happy holidays!